(In the Sims 3 Challenge her name had no space, so for this section it will be used in that way)

VaggySunshine is so perfect, that even as a toddler, she got invited to parties. It could also be said that she had the best childhood out of all of the kids in the Pregnant challenge; Kelly was always nice to her.

Of course, VaggySunshine was brought back in the Baby-Farm Era and was destined to be the "Queen of the Baby Herders", although in episode 26 KPopp contemplated whether the main baby maker should be VaggySunshine or Anorexia. VaggySunshine is the most active Child in the Pregnant Challenge, and is the Sim who has appeared in most episodes, other then Kelly.

At one point KPopp considered letting VaggySunshine marry Daron Byrd, so there could be a nice little romance and a wedding, but he proved difficult to convince, particularly when VaggySunshine confessed to cheating on him. In episode 36 she tried for a baby with him but did not get pregnant, so her sister Anorexia came in and took him for herself, and had his children (Sharla and Jerry).

In episode 38, KPopp eventually admitted that Anorexia was her favorite child, and since both of these girls are awesome, they have been dubbed both "the Golden Children," despite Anorexia's hate for her mother, Kelly. Anorexia KPopp is the only exception to VaggySunshine's powers.

KPopp let VaggySunshine marry Holden Wozny, she had to temporarily move in with him as a newlywed but has now come back to the active KPopp household. Holden was living with a girl named Gwen Glover, who Duck Face has impregnated.

VaggySunshine gave birth to twins, AMANDA BYNES and Miley Cyrus in episode 47; they have since moved away. She became a werewolf due to being bitten by one in episode 49. 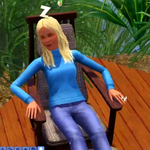 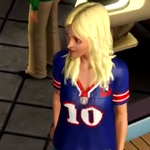 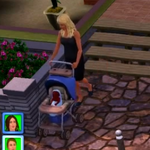 With her great-nephew Accident II

Vaggy's werewolf form!
Add a photo to this gallery

Vaggy Sunshine was chosen to be the main baby momma in The Sims 4 Pregnant Challenge and lived in Oasis Springs until she died from embarrassment and was replaced by Aunt Anna KPopp (Anorexia from the Sims 3 pregnant challenge). Although, in Episode 12, she came back as a ghost.

Vaggy Sunshine moved from the town of Appaloosa Plains to the beautiful world of Willow Creek to start fresh at the pregnant challenge, leaving the original KPopp family behind. She settled in a small cottage home in the poorest of the five districts of Willow Creek, but later she decided to move to a more affluent suburb in the desert town of Oasis Springs. It is here where she will be carrying on the legacy of the pregnant challenge.

As the challenge would go, Vaggy Sunshine had kick-started the challenge with introducing and hanging out with a fellow civilian named Julio Nix, whom she had twins with. She gave birth to Vulva Smiles and Tentacle Testi.

After having her first two children with Julio, Vaggy Sunshine moved on to her next victim of the challenge, Tom Wurth. Shortly after meeting Tom, Vaggy Sunshine was impregnated by him and is now currently expecting her third child.

Whilst in her 2nd semester of pregnancy, she proposed to Tom and they got married in the Wurth Residence. Shortly after, Vaggy and her children moved into the Wurth household, locking Tom in a fenced-off area which he cannot escape, later she locked the rest of his family in there as well. She aged up his son [1] to later use him as the next baby daddy, and then the rest Tom's family for the hell of it using cake, which her children wanted to steal.

After she gave birth to Pee Stain, Colt Worth was aged up and Vaggy attempted to flirt with him. Despite this, she managed to pee herself and they both died of embarrassment. Pee Stain tried to get Death to spare both of them, while Vulva Smiles was only going to try to help Vaggy, neither of them prevailed and both sims were turned into tombstones.

After death, she came out as a ghost out of her tombstone, and instantly WooHooed with Tom Wurth. However, she is not part of the household and she cannot have children.

Vaggy with one of her children

Vaggy as a ghost.
Add a photo to this gallery
Retrieved from "https://pregnantchallenge.fandom.com/wiki/Vaggy_Sunshine_KPopp?oldid=13240"
Community content is available under CC-BY-SA unless otherwise noted.