Over the span of the game, the KPopp household has lived in many houses. Five of them were pre-built houses, while KPopp built the Children's Barracks and the Baby Farm house.

This house was the house KPopp chose first for her Pregnant Challenge, not much is known about it. After KPopp finished furnishing it, her game crashed and she could not recover the house. KPopp then started over and chose the small ranch house instead. This house has one bedroom and one bathroom.

The first house KPopp lived in after her game crashed. It was where the Children's Barracks was built, was where the majority of her kids were born, including her first son Accident. It is a small ranch house with one bedroom and one bathroom. 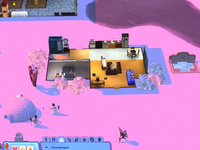 Interior of the small ranch house

The Children's Barracks
Add a photo to this gallery

KPopp's first Mansion only lasted about two episodes. She had a party and trapped everyone inside by locking the doors. But, she realized directly next door was a better looking mansion, so she moved to that. Only Ruben Z. Dix was born there, although TittySprinkle was raised there.

The modern mansion was where the KPopp household lived in for a longer time. It only had one bedroom, dispite having multiple kids. This was the location the llama came around putting gifts. Xias - Technician's ghost finally stayed and she got pregnant with Hairy Vag. 4 kids where delivered into this household. (This was also the nicest looking era.)

The current KPopp house was the former Parrott household. KPopp stole Poppy Cat from them, killed Ethan and his brother (Kanoa was not there, presumably he died), but Jazlyn was spared as she is a vampire and the trigger age transition was not working on her. KPopp then accidently killed Poppy Cat. It is the best household and is where Bitch Pudding and Binge-Eating were born/raised, just to name a few. It is also where Kelly got married to Narwhal Rumplestilt. The active KPopp family still currently live here.

Retrieved from "https://pregnantchallenge.fandom.com/wiki/KPopp_houses?oldid=12971"
Community content is available under CC-BY-SA unless otherwise noted.